Horace Mann, generally regarded as the father of America's current public school system, once prophesied: "Let the Common School ... be worked with the efficiency of which it is susceptible, and nine tenths of the crimes in the penal code would become obsolete; the long catalogue of human ills would be abridged."

It hasn't quite worked out that way, of course. Not only have the crimes not become obsolete, they are now occurring in the schools themselves, schools which in many ways have become like prisons. Worse yet, none of this comes as much of a surprise anymore; it's just something "the kids feel like they have to get used to," as one parent told The Oklahoman.

"Metal detectors across the Oklahoma City School District are being inspected in the wake of a student's arrest Monday at U.S. Grant High School in an incident involving a gun in the building," The Oklahoman's Wendy K. Kleinman and Augie Frost reported today.

Students at U.S. Grant said after school Wednesday that security measures are more stringent since Hodauri Latifu McCoy Jr., 14, was arrested on a felony complaint of carrying a firearm in a school. According to a police report, he pointed a loaded gun at another student and threatened others.

"It's just kind of something the kids feel like they have to get used to," said parent Rebecca Owens, who has a son in the ninth grade at the school.

Posted by Brandon Dutcher at 5:14 PM No comments:

Under the voucher concept, patients who have serious problems and need specialty care could receive such treatment through vouchers underwritten by local philanthropic foundations. The long-range goal is for vouchers to be underwritten by various public and private sources, including state and federal sources. Some observers feel the voucher concept eventually could be the answer to the state's uninsured problem.

Email ThisBlogThis!Share to TwitterShare to FacebookShare to Pinterest
Labels: Vouchers

A freshman at U.S. Grant High School in Oklahoma City was accused of bringing a gun to class yesterday, causing a school-wide lockdown.

Is this the kind of learning environment parents want for their kids? Is it fair to those trying to learn to have to question if they will live through the day?
Posted by Brandon Dutcher at 10:59 AM No comments:

Even though they've been to school

State Sen. Earl Garrison (D-Muskogee), a longtime educator who holds a doctorate in education (and who had the courage this year to vote for school choice), writes in the Muskogee Phoenix that "more than 20 percent of our state's population, or nearly 400,000 people, can't read."
Posted by Brandon Dutcher at 10:33 AM No comments:

An article in today's Journal Record examined causes of rising dropout rates in Oklahoma schools. As the state legislature conducts an interim study to assess the problem and determine solutions, we, too, must ask ourselves what needs to be done.

Andrew Grimes, a former Capitol Hill High School student, described a typical school day as one full of gangs, graffiti, and teen pregnancy. Grimes started his freshman year with 400 peers, but only graduated with 141.

Amir Jacob Darvishzadeh, another former Capitol Hill student, confirmed Grimes’ experience, and said the atmosphere was often a deterrent to learning. "Because of that, the students didn't care," Darvishzadeh said. "It wasn’t fair to me. It was a really sad experience."

One teacher, Sandy Bitner, said in her five years at the school, she knew of five students who were shot outside the building, one stabbed inside, some charged in drive-by shootings, and two charged with first-degree murder.

The interim study has found that some of the most evident causes of rising dropout rates are gangs, pregnancy, and language barriers. But, one cause many fail to see is our lack of school choice. If parents were allowed to choose where to send their students to school, they would likely send them to positive learning environments instead of defunct war zones.

It isn't fair, as Darvishzadeh said, to consign some students to unsafe and underperforming schools. It's time to give parents more choices.
Posted by Brandon Dutcher at 3:24 PM No comments:

State Rep. Jason Murphey (R-Guthrie) says "one size fits all" doesn't work in education, and that children with autism should be able to choose from a variety of schools.
Posted by Brandon Dutcher at 3:01 PM 1 comment: 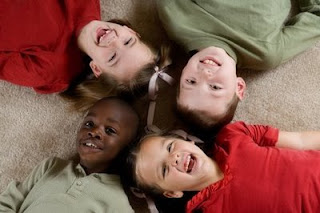 Oklahomans for School Choice now has a Facebook group. If you're signed up on Facebook, come join the group!
Posted by Brandon Dutcher at 1:06 PM No comments:

... political realignment.
Posted by Brandon Dutcher at 3:31 PM No comments:

Is it possible that politicians and bureaucrats may not know what's best for everyone else's children?
Posted by Brandon Dutcher at 11:21 AM No comments:

On Labor Day, the American Federation of Teachers released its ninth annual AFT Public Employees Compensation Survey. It predictably concludes that public employees are woefully underpaid, but I'll leave the usual arguments against such conclusions to others (fat lot of good it will do, anyway).

Screeech! Once we're done applying the brakes, we apply a factoid of which AFT is well aware: Only 7.5 percent of private sector employees are unionized. How is it that non-union employees earn so much more for comparable jobs (by AFT's own definition) than union employees? And if unions believe they would be able to get private sector workers even more than they receive now, if given the chance, wouldn't that just increase the gap between public and private sector wages?

It's simple once you discard AFT's framing. In the private sector, wages are determined by market economics. In the public sector, wages are determined by political lobbying and tax rates. In the public sector, you'll earn more with AFT than without it. In the private sector, you'll earn more because AFT can't outperform Adam Smith.

Posted by Brandon Dutcher at 3:48 PM No comments:

More public school teachers favor them than oppose them.
Posted by Brandon Dutcher at 3:19 PM 1 comment:

The growth of online learning

In the current issue of WORLD magazine, Marvin Olasky reports that "a new study from the Hoover Institution predicts that by 2019 half of courses in Grades 9 to 12 will be delivered online. Technology is now helping all homeschoolers by making it possible for kids to be tutored and mentored online at the pace that's right for them ..."
Posted by Brandon Dutcher at 1:20 PM No comments:

Education is the civil rights issue of this century. Equal access to public education has been gained. But what is the value of access to a failing school? We need to shake up failed school bureaucracies with competition, empower parents with choice, remove barriers to qualified instructors, attract and reward good teachers, and help bad teachers find another line of work.

Posted by Michael Bates at 11:31 PM No comments:

The nation's largest newspaper reports (Democrats, teachers unions now divided on many issues) that the Democratic Party "has visibly split with teachers unions, its longtime allies, on key issues."

At a series of standing-room-only forums in Denver last week in conjunction with the Democratic National Convention, several urban mayors and educators said union contracts limit their ability to fire bad teachers and move good ones to needy schools. "We have to understand that as Democrats we have been wrong on education, and it's time to get it right," said Newark Mayor Cory Booker. He said unions have pressured him to reject charter schools, vouchers and other ways to broaden urban students' access to better schools.

Posted by Brandon Dutcher at 2:35 PM No comments:

Email ThisBlogThis!Share to TwitterShare to FacebookShare to Pinterest
Labels: Democrats

High levels of satisfaction among private school parents also extend to opinions about their children's teachers, academic standards of the school, order and discipline at the school, the amount of homework assigned, and interactions with school personnel.

Posted by Brandon Dutcher at 2:15 PM No comments: