FOX 25 has the story.
Posted by Brandon Dutcher at 9:46 AM No comments:

Her Ed Week column is here.
Posted by Brandon Dutcher at 9:47 AM No comments:

Racism and the government school monopoly

"A story about racism in Edmond public schools points to the role parental choice can play in protecting vulnerable students and strengthening school discipline policies when it comes to racism," Greg Forster writes.
Posted by Brandon Dutcher at 1:10 PM No comments:

KFOR has the story.
Posted by Brandon Dutcher at 10:46 AM No comments: 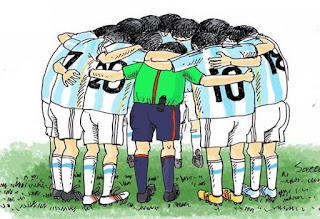 "How much do you trust the news media?"

In a survey of likely Oklahoma voters conducted this year by Cor Strategies, two out of three Oklahoma Democrats answered “a great deal” or “a good amount.”

However, nearly three in four Oklahoma Republicans said “not at all” or “not very much.”

That’s telling, but not surprising. I’ve experienced media bias firsthand. I’ve spent hours talking to reporters at The Washington Post, The Economist, and other media who already had their story formula prepared: Recent GOP tax cuts have led to drastic cuts in Oklahoma education funding.

I explain to these reporters that there’s been only one income tax cut as a result of Gov. Mary Fallin’s tenure—a quarter-point reduction in the personal income tax rate. Meanwhile, in the last four years, our state’s political leaders have raised $1.1 billion in annual taxes and other revenues.

And education cuts? Total inflation-adjusted education funding (including retirement and excluding bond sales) rose from $9.14 billion in 2013 to $9.24 billion in 2017 (the most recent year available). Per-pupil revenues fell from $13,579 to $13,319. Hardly apocalyptic.

Needless to say, these facts don’t fit into liberal reporters’ preordained narrative. Their slogan could be: All the news that fits, we print.

It’s not just national reporters. A reporter at Oklahoma Watch reported on Nov. 7 that Republican “tax-cutting policies contributed to steep cuts to education funding over the past few years.” Tax-cutting policies? Steep cuts? Not true.

The Associated Press reported on Aug. 29 that “this year’s (primary election) vote came after four consecutive years of budget shortfalls that have decimated funding for public schools.” Decimated!

And on it goes. Just last week, in the lede of a straight-news story recapping the election, a Tahlequah Daily Press reporter informed us that “Oklahomans—sort of like the Soviets and the Chinese—will live under the rule of a single political party for the next two years.”

Seriously? This would be offensive enough in an op-ed. But how could a reporter write that in a news story? And how could an editor let it remain?

Is it any wonder Oklahoma Republicans don’t trust the news media?
Posted by Brandon Dutcher at 4:08 PM No comments:

Oklahoma teacher says ‘Stitt is such a stereotype’

Oklahoma teachers favored Drew Edmondson over Kevin Stitt three to one in this month's gubernatorial election. One presumes that Jennifer Williams, an AP English teacher who believes that "Whites are sucking the life from America" and who is fed up with standard English and other systemic oppression, was one of the Edmondson backers. She is not a fan of Oklahoma Governor-elect Kevin Stitt:

Stitt is such a stereotype: White, male, "Christian," wealthy, cishet. He’s a poster child for the GOP.

I'm not sure what to make of the quotation marks; is she saying that Stitt is, in fact, not a Christian?

Happily, most Stitt voters don't know what "cishet" means (it's a heterosexual who identifies with his actual gender).
Posted by Brandon Dutcher at 6:54 PM No comments: 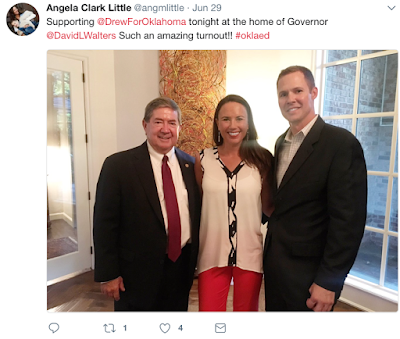 "In May, Oklahoma Parents and Educators for Public Education, a group active on social media, issued candidate endorsements," The Oklahoman reminds us. "The group labeled now Gov.-elect Kevin Stitt 'dangerous for public ed' because he wanted to fund teacher pay raises without tax increases. The label clearly didn't hurt Stitt, who receive a record number of votes for a gubernatorial candidate."
Posted by Brandon Dutcher at 6:38 PM No comments:

KTUL has the story.
Posted by Brandon Dutcher at 9:35 AM No comments:

Chandler teacher arrested for sexual abuse of a child

KFOR has the story.
Posted by Brandon Dutcher at 1:49 PM No comments:

Brawl at Edmond school sends student to the emergency room

KFOR has the story.
Posted by Brandon Dutcher at 1:47 PM No comments:

Dylan Goforth and Kassie McClung have an insightful story at The Frontier.
Posted by Brandon Dutcher at 7:56 PM No comments:

"A metro mother said her son has been left concussed and in the hospital after an altercation at a local middle school," KFOR reports. "Now, she said she's fed up with what she said has been repeated bullying and is considering homeschooling her son."
Posted by Brandon Dutcher at 3:58 PM No comments:

SoonerPoll: Oklahoma teachers favored Edmondson over Stitt three to one

"In a scientific online survey of Oklahoma teachers, chosen at random throughout the state, 63.7 percent would be voting for Edmondson and 21.6 percent for Stitt," SoonerPoll reports.

In the actual election, all voters (not just teachers) got to have their say. Kevin Stitt won 73 of 77 counties, racking up 54 percent of the statewide vote compared to Edmondson's 42 percent.
Posted by Brandon Dutcher at 4:34 PM No comments:

"Government waste and questionable expenditures are bad in times of budget stability but they're especially vexing when finances are strained," The Oklahoman's editorial board points out.

In Tishomingo, an independent audit indicates former Superintendent Kevin Duncan, who left that job in June, used $78,000 in school funds for personal purchases, according to a report from television station KXII. The audit found Duncan misspent school funds on items like cellphones, an iPad, Beats speakers, a laptop, pool salt, a 55-inch TV, lamp shades and barbed wire, and submitted $1,400 in travel reimbursements for a hotel that didn't appear to be a job-related trip.

Some misspending came to light earlier this year when Duncan's replacement found documents related to the purchases and Oklahoma State Bureau of Investigation officials searched Duncan's home. The reported findings of the audit, however, suggest the misuse of funds was even greater than initially believed.

While Duncan is responsible for his own actions, $78,000 in misspent funds represents systemic failure that includes the district's school board. Was anybody minding the store? And if school officials failed to keep track of that much money, one wonders how they can claim recent state funding increases will be better spent?

In 2016, Duncan was one of 20 administrators named District Superintendents of the Year by the Oklahoma Association of School Administrators. OASA's executive director described the honorees as people who exhibited “strong leadership skills.” One hopes OASA was mistaken in declaring Duncan one of the leading lights of their profession. ...

At Nathan Hale High School in Tulsa, officials are not in legal trouble but have provided reason to question their priorities and judgment.

Television station KTUL reports that Hale High spent $22,000 to send 12 employees, including Principal Sheila Riley, to a four-day conference in Las Vegas that overlapped with the statewide teacher strike. Then the school spent another $15,000 in June to send Riley and three other administrators to another conference in Napa, California. Overall, the school spent $37,000 in “Title I” funds on similar professional development trips last school year.

Riley said the federal money was originally intended to pay to hire a teacher and a paraprofessional. But when the school couldn't find qualified candidates, she said officials had to find other ways to spend the money so the district would qualify for a similar amount of federal funds in future years.

We don't doubt value can come from professional development programs, but the public is justified in doubting that these rushed expenditures were designed to provide real value to the school.

When it comes to credibility on spending and financial oversight, the actions of officials in these two Oklahoma districts have done little to help education's cause.

Posted by Brandon Dutcher at 2:59 PM No comments: