FOX 25 has the story.
Posted by Brandon Dutcher at 9:04 PM No comments:

Gun discovered on the floor inside Canton Elementary School

"The Canton police chief has been suspended after a gun was discovered on the floor inside Canton Elementary School," News 9 reports.
Posted by Brandon Dutcher at 9:02 PM No comments:

KUSH has the story.
Posted by Brandon Dutcher at 8:59 PM No comments:

KFOR has the story.
Posted by Brandon Dutcher at 8:57 PM No comments:

"The Oklahoma State Board of Education has suspended the certificates of longtime Peckham Public School Superintendent Gary Young after receiving multiple allegations of sexual assault, sexual battery, and sexual harassment from former students and coworkers," NonDoc reports.
Posted by Brandon Dutcher at 8:49 PM No comments:

KFOR has the story.
Posted by Brandon Dutcher at 8:46 PM No comments:

The latest incident involves a substitute teacher who threatened to kill an elementary student during class. "This now the third incident in 6 days of school," said Pawhuska Police Chief Nick Silva. "This is not a trend we want."
Posted by Brandon Dutcher at 8:43 PM No comments:

Colleges of education are failing. Even as ed schools are extensively colonized by far-left ideology, it turns out that teacher education makes no visible difference to student achievement. Parents and taxpayers deserve better. A new OCPA study proposes a few simple policy changes which could help make reinvention of teacher education plausible, attractive, and sustainable.
Posted by Brandon Dutcher at 12:40 PM No comments:

'She doesn't feel safe at the school she’s assigned to'

A 12-year-old student in Moore was forced to walk two-and-a-half miles home in extreme heat, News 9 reports. The girl's mother says "her daughter visited the school office in an effort to figure out what bus to ride home." Staff allegedly told the girl to either "guess or walk home." Her mother told KFOR that the school staff in the office "wouldn’t even let the girl look up her mom’s phone number to call for help."
Posted by Brandon Dutcher at 3:39 PM No comments:

The warning signs of back-to-school bullying

KTUL has a helpful report.
Posted by Brandon Dutcher at 1:55 PM No comments:

Parental choice is an effective form of accountability

Mike Brake has the story.
Posted by Brandon Dutcher at 3:06 PM No comments:

Bullied at school, six-year-old walks out of OKC school, wanders along I-240 and Western

"A good Samaritan helped reunite a mother with her 6-year-old son, who was found wandering along a busy road after he walked out of an elementary school," KOCO reports.

First-grader Xavier left Southern Hills Elementary School on Tuesday after he told his teacher that he had to use the bathroom. Instead, he was found walking along Interstate 240 and Western Avenue in the rain with no adult in sight.

Amanda Lopez, who was driving in the area, told KOCO 5 that she was in the right place at the right time. She recorded a video, stunned at what she was seeing.

"There's a 6-year-old little boy standing out here in the street by himself," Lopez said while recording the video.

Lopez is furious, saying a mother could have lost a child.

"We're putting our babies in these people's hands, and for that baby to walk off like that, it's not right," Lopez said.

Lopez and a group of others helped Xavier and tracked down his mother, who was visibly upset and wondering how this happened.

Oklahoma City Public Schools officials called the incident unfortunate, saying, "We are currently working through it with school staff and the family involved. As always, the safety and security of OKCPS students is our top priority."

Lopez is thankful she was in the right place at the right time but hopes the situation leads to more than just an apology.

"That child walking down the side of the highway like that, anybody could've took home and he woulda been gone," Lopez said.

According to Lopez, Xavier told her he was trying to find his way home after being bullied at school.

Posted by Brandon Dutcher at 10:34 AM No comments:

KJRH has the story.
Posted by Brandon Dutcher at 11:51 AM No comments:

But to what end?
Posted by Brandon Dutcher at 2:35 PM No comments:

Ray Carter has the story.
Posted by Brandon Dutcher at 12:32 PM No comments:

Their network of surveillance cameras is monitored 24/7. "We have someone in here in dispatch watching the cameras, monitoring alarms; making sure our schools are safe and secure even through the night," said Putnam City Schools campus police chief Mark Stout.

Posted by Brandon Dutcher at 12:52 PM No comments:

'Tis the season for utility-bill verifications 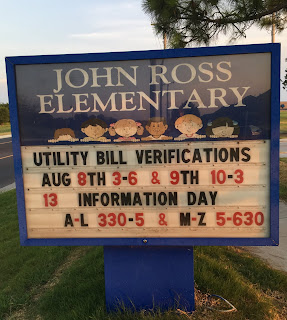 This photo I snapped today in overwhelmingly white north Edmond serves to remind us that the black market for school choice is still thriving.
Posted by Brandon Dutcher at 9:21 PM No comments:

"A mother is speaking out tonight after a former Catoosa teacher accused of inappropriately touching students turned himself in," KTUL reports.

"She went up there to complain about it, and they told her to be quiet," said the mother.

Since the incident, this mother says her daughter is afraid to go to school and isn't sure if she’ll be returning to Catoosa this year.

We reached out to the district for a comment, but our calls were not returned.

Posted by Brandon Dutcher at 11:33 AM No comments:

One little girl, who was adopted from foster care in 2015, suffers from fetal alcohol syndrome, ADHD, the after-effects of severe abuse, and more. Her mom says the Lindsey Nicole Henry scholarship has been a godsend.
Posted by Brandon Dutcher at 10:50 AM No comments:

Who you gonna call?

When the movie “Ghostbusters” premiered in the 1980s, it was just a comedy. But if it’s remade (again) in 2019, the setting may be in Oklahoma’s public school system. That’s because there’s reason to think many districts are receiving funding for “ghost” students who do not attend those schools.

This issue gained attention when it was recently alleged an online charter school has received funding for “ghost” students, but that problem extends statewide.

Here’s why: Oklahoma law distributes state aid based on several factors, and one factor is a district’s average daily membership (ADM). State law allows districts to use the highest weighted ADM of the two preceding school years. As a result, if a district has 400 students one year, 380 the next, and 360 the following year, that district may be funded as though it still has 400 students when it has just 360.

It’s even possible for a student to be counted in multiple districts at the same time if a child moves from a district with declining enrollment to one with surging enrollment.

Just because this is currently legal doesn’t make it a good idea. Given the financial challenges constantly highlighted at schools, why would we expend money paying districts to educate children who are not at those schools?

By the way, “ghost” funding doesn’t occur just at one type of school. While some rural districts may benefit, so can Oklahoma’s largest districts—Oklahoma City and Tulsa—which have also experienced declining enrollment. In the urban centers, families have had good reason to move out, so why would state lawmakers leave in place a system that financially rewards districts like Oklahoma City for poor performance that drives students away?

Pinning down the number of “ghost” students being double-counted or still reflected in district ADMs after moving out of state is no easy task, but there are some hints. According to the Oklahoma Department of Education, the high-year ADM for all schools combined in the 2019 state budget year was 711,560. That compares to a reported total enrollment of 698,586 as of the most recent count, which occurred on Oct. 1, 2018.

That’s a difference of almost 13,000 students. Now, not all those 13,000 are “ghost” students. But if even half of them are, that would easily translate into tens of millions of dollars that have been misallocated for educating nonexistent students.

States like Indiana and Arizona have stopped using backward-looking student counts that result in ghost-student funding and instead rely on current-year headcounts. There’s no reason Oklahoma can’t do the same.

Conservatives and liberals disagree on education policy and spending priorities, but surely we can all agree that paying to “educate imaginary students” should not even be on the list.
UPDATES:
Posted by Brandon Dutcher at 9:30 AM No comments: "School districts across the country are increasingly turning to new technology to help minimize the impact of an active shooter," FOX 25 reports.


Just this year, the Oklahoma State Department of Education secured $3 million in new funding to implement a statewide panic button system. “We have 540 brick-and-mortar districts, and we hope that 100% of them have adopted the program by the end of the 20-21 school year,” said Jon Parker, executive director of school safety & security at the Oklahoma State Department of Education.

The department is providing the RAVE Panic Button to all districts. It’s an app that alerts authorities to an active shooter, a medical emergency, a fire, or other crisis. The app simultaneously sends out a notification to other teachers and staff on campus as well.

“Staff members are very well-equipped to be able to respond quickly, but they can’t respond until they know they need to respond,” said Noah Reiter, vice-president of customer service for RAVE Mobile Safety. “So this application reduces the time it takes for them to implement their emergency response.” ...

Oklahoma will join states like Delaware and Arkansas, along with the District of Columbia, in deploying this technology. It reflects a growing trend—and booming business—in the U.S. In 2017, security equipment and services for schools generated $2.7 billion in revenue, according to analysis by HIS Markit.

Booming business! Indeed, it looks like this private company may even (gasp!) turn a profit. Which is fine with me. For as past OCPA speaker Walter Williams reminds us, profits are very much a good thing.
Posted by Brandon Dutcher at 11:50 AM No comments: