"Critics of education choice claim that introducing and expanding choice programs will lead to a massive exodus of students," Martin Lueken and Michael Castro write.
It won't.
Posted by Brandon Dutcher at 12:14 PM No comments:

Email ThisBlogThis!Share to TwitterShare to FacebookShare to Pinterest
Labels: Research

"Members of the Oklahoma House of Representatives have approved legislation that would force the State Board of Education to adopt new academic standards for health education," Ray Carter reports. "Critics are concerned the proposed replacement standards may allow school officials to promote abortion in a classroom setting."

Posted by Brandon Dutcher at 2:12 PM No comments:

Luke Rosiak has the story.
Posted by Brandon Dutcher at 3:14 PM No comments:

KFOR has the story.
Posted by Brandon Dutcher at 9:48 AM No comments:

Posted by Brandon Dutcher at 10:38 AM No comments:

Email ThisBlogThis!Share to TwitterShare to FacebookShare to Pinterest
Labels: Friends Like These, Sexual Abuse of Children, Unsafe Schools

Bixby backs away from LGBTQ training for pre-K teachers

Ray Carter has the story.
Posted by Brandon Dutcher at 5:02 PM No comments:

Ray Carter has the story.

Posted by Brandon Dutcher at 10:42 AM No comments:

KOCO has the story.
Posted by Brandon Dutcher at 3:32 PM No comments:

KFOR has the story.
Posted by Brandon Dutcher at 9:20 PM No comments:

KOCO has the story and a follow-up story.

Posted by Brandon Dutcher at 10:59 AM No comments:

KTUL has the story.
Posted by Brandon Dutcher at 9:51 AM No comments:

"The Deer Creek school district has hired the Oklahoma Center for Community and Justice (OCCJ) to provide up to 13 workshops whose objectives include a focus on 'diversity, inclusion, implicit bias, and inclusive leadership,'" Ray Carter reports. "Notably, a blog post on OCCJ’s website touts Critical Race Theory (CRT) as an important 'means of learning and education that acknowledges our country’s history of colonization and enslavement.' The OCCJ blog also appears to tout Marxism."
Posted by Brandon Dutcher at 3:36 PM No comments: 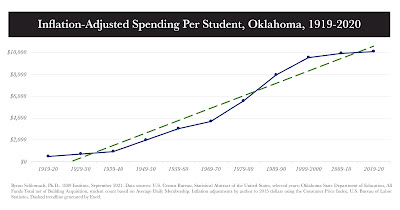 Oklahoma public schools “have more money than they’ve ever had in the history of the state," one House leader notes, "and it’s not even close.”
Posted by Brandon Dutcher at 11:48 AM No comments: 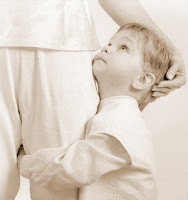 This week is Teacher Appreciation Week, a time to celebrate the 3.6 million school teachers in this country, including some 421,000 working in private schools.
But there are many other teachers who also deserve our gratitude, including one who lives under my own roof. The very picture of unselfishness, for years Susie Dutcher has gone about her work each day with a quiet strength and dignity, often toiling into the wee hours over essays and worksheets and lesson plans for our homeschooled children.

“She looks well to the ways of her household,” as the proverb says, “and does not eat the bread of idleness.”

“I respect your public service,” she once testified in the nation’s capital before a subcommittee of the U.S. Senate Finance Committee. “And I hope you respect my public service, which consists of providing the public with one healthy family, comprised of well-adjusted, productive individuals.

“Because of the time and money and energy I invest in their lives,” she said, “I believe my children will grow up to do great things.”

Economists tell us the difficult work of childrearing provides a benefit to society (I believe the term is “positive fiscal externality”). “Everyone benefits from having a next generation in place to sustain the society and keep its institutions going,” writes Jennifer Roback Morse. “In modern developed countries, the family saves the state money by taking care of its own dependent young, rather than foisting that responsibility onto the taxpayers.”

Our political leaders should appreciate these parents, including those mothers who educate their own children. These teachers build human capital without making demands on budget-conscious appropriators already besieged with requests from competing interests.

After all, policymakers don’t have to provide my children’s teacher a salary, health and retirement benefits, and so on. Indeed, her family’s tax dollars help pay the salaries of public school teachers. She pays for school breakfasts and lunches, too—both for our own children and for the children of our fellow citizens. She buys her own school supplies (without the tax deduction, alas, that other teachers enjoy) and also buys school supplies for others.

When it’s all said and done, her hard work of educating our children will have saved our political leaders well over half a million dollars. That’s money they can use to build roads and bridges, incarcerate criminals, or pay schoolteachers.

Imagine how much money politicians would have to come up with—not only current expenditures but also construction costs—if a few million homeschooled students showed up at public schools nationwide tomorrow morning wanting to enroll.

My children’s teacher is not a professional. She’s an amateur, a word that traces to the Latin amare (“to love”).

“Rather than an exchange,” economist John D. Mueller explains, “love is best described in economic theory as a gift or voluntary ‘transfer payment’—that is, as a voluntary distribution out of one’s resources not made in compensation for useful services rendered.”

As she told the senators that day, “I used to be a schoolteacher, and certainly the salary and benefits I could earn teaching school would improve our material well-being. But some checks can’t be cashed at the bank: My son, when he was 3 years old, said to me one day, ‘I’m proud of you ‘cause you do the right things. Like take a shower, and fix my breakfast … Those kind of things.’

“I know it’s all worth it when we’re on the floor playing with blocks and I notice out of the corner of my eye that he has stopped playing and is staring at me like a smitten young man. ‘I love the way you talk,’ he said to me. ‘And I love the way you smell.’

That little boy’s all grown up now, doing a residency in orthopedic surgery—thanks to his teacher, who very much deserves our appreciation.
[An earlier version of this article (now behind a paywall, alas) appeared in the Tulsa World.]
Posted by Brandon Dutcher at 5:52 AM No comments: