Oh yeah, firms are beating her door down to pay her $85K

Governor of New Jersey: "Well, you know what? Then you don't have to do it."

Posted by Brandon Dutcher at 8:09 PM No comments:

Public money to private schools? Sounds pretty ominous. Except that it already happens all the time. Oh, and Oklahomans are good with it.
Posted by Brandon Dutcher at 11:15 PM 1 comment:

In Democracy in America, Tocqueville warned that if despotism were to come to America, it wouldn't be your garden-variety despotism. "It would be more extensive and milder, and it would degrade men without tormenting them." He speaks of a "regulated, mild, and peaceful servitude" which "does not tyrannize, it hinders, compromises, enervates, extinguishes, dazes, and finally reduces each nation to being nothing more than a herd of timid and industrious animals of which the government is the shepherd."
Comes now Mr. Neil Brannon of Arkoma, Oklahoma. A former school principal and superintendent, the avuncular and well-meaning Mr. Brannon represents District 3 in the state House of Representatives. On May 21, Rep. Brannon, a Democrat, argued against legislation which would give more school choices to parents of special-needs students.

Now in some cases, the benevolent solon from LeFlore County magnanimously allowed, mothers and fathers "know what's best for their child." Yes indeed, in some cases, mothers and fathers are actually "very good in making decisions about their child." But in other cases, he warned darkly, "I've seen students with disabilities where the parents had disabilities also. Are they really the ones that ought to be making the decision about where that child goes?"

One can only speculate as to what's going on in Arkoma, what reproductive practices and resultant disorders are fueling this multi-generational cycle of unreliable decision making. I find it difficult to believe it's a widespread problem. And I find it difficult to believe I'm the only Oklahoman who resents the paternalistic impulses of a politician (Tocqueville warned of "an immense tutelary power" which would take charge of watching over us) -- especially a politician who once superintended a school district where the math achievement of the average student is at the 12th percentile relative to an international comparison group. It's altogether possible, Rep. Brannon, that we are grown men and women in a free society and that we can get along just fine, thank you.

The simple truth is that Rep. Brannon wants politicians and bureaucrats -- not parents -- to choose what's best for children. Because given a choice, parents may well head for the exits of their local public school. And "I don't think we need to open the door, to just throw it wide open," he says. After all,

Parents "may think they know what's best, but do they?"


Wow. Gotta admire the candor. Bless his heart for just saying that right out loud on the House floor.

All of which leaves me with a very important question for Rep. Brannon. If the parents of House District 3 aren't capable of choosing a good school for their children, how can they be trusted to choose a competent official to represent them in the Oklahoma House of Representatives?
Posted by Brandon Dutcher at 1:10 PM 1 comment:

CapitolBeatOK reports that an Enid student with autism visited the Oklahoma state capitol yesterday in support of House Bill 3393, the special-needs scholarship bill.
Posted by Brandon Dutcher at 10:57 PM No comments:

State Rep. Jason Nelson (R-Oklahoma City) had an excellent column this morning in The Oklahoman arguing in favor of House Bill 3393, a bill providing scholarships for special-needs students. The House passed the bill this afternoon by a margin of 54-46:

Email ThisBlogThis!Share to TwitterShare to FacebookShare to Pinterest
Labels: Special-Needs Scholarships
Posted by Brandon Dutcher at 5:12 PM No comments:

Email ThisBlogThis!Share to TwitterShare to FacebookShare to Pinterest
Labels: March of Freedom

Here's the text of a letter released this week by The State Chamber of Oklahoma.

House Bill 3393 allows students with developmental disabilities and their families freedom to direct the education services they receive. Oklahoma law currently allows school districts to place special education students in private schools, with the consent of the parents, if they are not able to provide the necessary special education services. This measure will assures the same option will be directly provided to parents.

With strong bipartisan support during this year’s session, HB 3393 provides scholarships for private special education while limiting the financial and legal liability of public schools. The bill provides needed reform for special education students without increasing state spending during the current budget crisis.

Posted by Brandon Dutcher at 11:51 AM No comments:

Despite a $9 billion unfunded liability, CapitolBeatOK reports that the Oklahoma Teachers' Retirement System is throwing away perfectly good furniture and spending $105,000 on renovations.
Posted by Brandon Dutcher at 4:55 PM No comments:

The Oklahoma Legislature is considering providing scholarships for special-needs children. The idea is quite popular in Oklahoma. And as this video makes clear, it's the right thing to do.

Posted by Brandon Dutcher at 10:24 AM No comments:

Another black Democrat for school choice


School choice means supporting the full menu of educational options, including public schools, charter schools, magnet schools, private schools, and vocational schools, just to name a few. Parents should have the right to choose which school is best for their children. The money should follow the child.

Posted by Brandon Dutcher at 9:44 AM No comments:

Republicans side with teacher unions ...

... and sell out Chicago schoolchildren.
Posted by Brandon Dutcher at 10:40 AM No comments:

As an assistant principal who has been charged with sex offenses against children continues to make headlines in Tulsa, Robert Maranto reminds us in today's Philadelphia Daily News that the rate of sexual misconduct among male schoolteachers may be considerably higher than among male priests.
Posted by Brandon Dutcher at 12:23 PM No comments:

According to a national organization much admired by Oklahoma's education establishment, Oklahoma's K-12 spending per pupil for the 2008-09 school year was $8,814. This still doesn't count all the relevant costs (OCPA has produced a financial statement showing the real cost per pupil is $10,257), but by including capital spending they've at least gotten closer to the real number. And for the teacher unions pushing State Question 744, I'm guessing $8,814 is too close for comfort.
Posted by Brandon Dutcher at 12:18 PM No comments:

"Allegations of 'inappropriate touching of male students' by the assistant principal at Skelly Elementary School were first reported to the principal in October," the Tulsa World reports.

A longtime teacher who worked at Disney Elementary School when Yerton was there said that she and at least 40 other teachers reported inappropriate behavior by Yerton with male students to the principal.

"When we would line up in the hall, he would always comment on what pretty eyes he has," she said referring to male students in other teachers' classes. "He would touch them and put his hands in their hair. He massaged their shoulders. He would pick them up and put them on his shoulders and slowly slide them down his body."

The teacher said Disney's principal always defended Yerton and even made him a "team leader" in charge of a group of his fellow teachers.

"I told him (the principal), 'Robert's touching these boys and massaging them.' My principal responded, 'Kids learn better in a relaxed atmosphere and Robert's just using relaxation techniques.' Another teacher went to the principal and he told her she was just overreacting."

The teacher said the principal's inaction drove her and many of her colleagues to request transfers to other schools in the district.

"It wears on your nerves. It was borderline, but he always had rooms in portables (classroom trailers) and his door was always shut. He had kids to come after class for anything he could find. Never girls, though, only boys," the teacher said. "You don't touch children. That's the bottom line. Massage techniques are not appropriate."

The teacher added, "This has bothered me for years—I wished I could have taken it farther, but we were more or less under pressure to keep our mouths shut."

Posted by Brandon Dutcher at 11:06 AM No comments:

Here's a photo I snapped a little after 5:00 this evening. God love 'em, I hope they were here lobbying for more money. 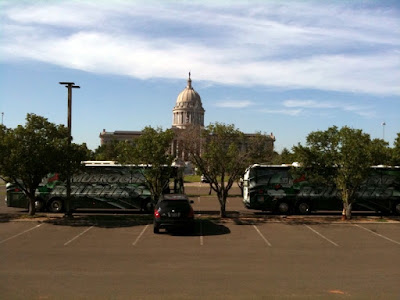 
The Oklahoman, CapitolBeatOK, and the Associated Press report on House Bill 3393, the special-needs scholarship bill. Video from yesterday's press conference is here.


Posted by Brandon Dutcher at 2:06 PM No comments:

"I'm living proof that being able to choose a school has helped my family so much, because it's all about independence," Emily Deal said at a press conference today. "I don't want my child to be a lifelong ward of the state."
Posted by Brandon Dutcher at 5:02 PM No comments:

State Rep. Anastasia Pittman is a co-author of House Bill 3393, a bill which creates the Scholarships for Students with Disabilities Program. Under the bill, students with disabilities (such as Down syndrome or autism) who have an individualized education program (IEP) would qualify for a scholarship to attend any public or private school that meets the accreditation requirements of the State Board of Education. In a press conference this afternoon, Rep. Pittman (D-Oklahoma City) said that many Oklahoma parents "have been trampled on, their voices have been stifled, for so many years because no one seems to hear that they too deserve the best education."

Posted by Brandon Dutcher at 2:32 PM No comments:

In an excellent letter to the editor published yesterday in The Oklahoman, Alene Grimes of Oklahoma City points out some inconvenient truths about early-childhood education and raises the question, "Who is benefited?" That's an excellent question. The answer is here.
Posted by Brandon Dutcher at 9:46 AM No comments: