Mike Seals has the story.

Posted by Brandon Dutcher at 9:25 AM No comments:

KFOR has the story.

Posted by Brandon Dutcher at 3:51 PM No comments:

"The data seem to show that the main driver of secularization has been the acceleration of government spending on education and government control over the curricular content taught in schools."
Posted by Brandon Dutcher at 2:08 PM No comments:

Email ThisBlogThis!Share to TwitterShare to FacebookShare to Pinterest
Labels: Bottomless Pit, Worldviews in the Classroom 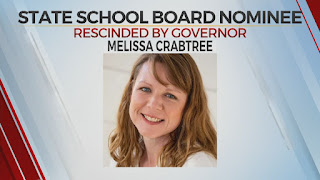 During U.S. Supreme Court Justice Brett Kavanaugh’s confirmation hearings, critics portrayed him as a drunk and a rapist. Fortunately, lawmakers saw through those attacks and confirmed Kavanaugh.

Sadly, similar character assassination, recently carried out in Oklahoma, sidelined a qualified nominee for the State Board of Education.

This sad episode began when Gov. Kevin Stitt recently removed Kurt Bollenbach from the State Board of Education and named Melissa Crabtree of Enid as his replacement.

Bollenbach was clearly out of step with conservatives and the governor who appointed him. His removal was justified because Bollenbach vocally supported efforts to bar Christian schools from serving children who receive scholarships through a state program. The regulations cited to justify that action were illegally adopted, as an opinion by Attorney General Mike Hunter soon made clear. It was obvious new blood was needed on the board.

In response, school-choice opponents launched a smear campaign against Crabtree. Sadly, they succeeded, and she withdrew from consideration.

As with Kavanaugh, this debate was not over qualifications, but over whether conservatives in leadership would advance the conservative policies endorsed by voters.

Crabtree’s qualifications cannot be denied. She taught special education in public schools for four years, meaning she may have more classroom experience than the current state superintendent. Crabtree also taught the parents of children with disabilities and served at-risk families of children with special needs for more than a decade through her church.

What part of “longtime educator with expertise in special education” sounds like a bad fit for the State Board of Education?

Crabtree’s critics objected that she homeschooled her own children. Many other Oklahomans have done the same. (I’m proud to say I was homeschooled as a child, yet here I am today, a licensed CPA.) Polling shows thousands more would homeschool if it were financially feasible. And last spring’s COVID-19 shutdown left many Oklahomans with a new appreciation for those who successfully homeschool.

Crabtree’s critics objected that she opposed mask mandates. That’s not out of line with many Oklahomans, and the science behind mask mandates is not scientifically rigorous.

Critics said Crabtree touted zinc and Hydroxychloroquine for COVID-19. A lot of Oklahoma doctors and pharmacists quietly do the same.

Taken as a whole, the attacks on Crabtree—like those lobbed against Kavanaugh—were clearly intended only to prevent conservatives from serving in state government.

Many citizens complain Oklahoma has remained mired in the bottom of education rankings for decades. But we can’t expect results to change if the only government-education officials deemed “acceptable” to serve are those unwilling or unable to think outside the box and do things differently.

Posted by Brandon Dutcher at 5:55 PM No comments:

Inaction on parental choice is impossible

A new poll by Cole Hargrave Snodgrass & Associates (CHS) found 61% of Oklahoma voters support school choice, which was defined as “the right to use tax dollars raised for their child’s education to send their child to the school of their choice whether it is public, private, online, or charter.”

Among Republicans primary voters, support reached 74%. Support was consistent in both urban and rural areas.

That strong support is no surprise, especially considering ongoing public-school closures. Those closures are wreaking havoc and destroying opportunity. This is evident in increased failure rates in academic courses and significant learning loss.

In August, an official from Tulsa Public Schools even told the State Board of Education that district officials expected “that our least-reached students will have lost approximately a year more learning than would have otherwise been the case because of the COVID-related interruptions. So if I’m a student who might otherwise have been predicted to be two years below grade level, we’re anticipating that that student will now be approximately three years below grade level.”

Some school officials now want to end state testing, ensuring parents will not be notified of a child’s learning loss.

In January 2019, House Speaker Charles McCall said lawmakers “must put parents back in charge of their children’s education and give underprivileged families more options and more opportunity to thrive.”

This year Senate President Pro Tempore Greg Treat endorsed raising the cap on Oklahoma’s tax-credit scholarship program, saying, “Where there are kids that lack opportunity, my heart pains for them. We need to make sure they are not forgotten.”

Gov. Kevin Stitt endorsed school choice in his 2020 State of the State speech, saying, “Let’s work together to make sure all students at all schools have access to an innovative, enriching curriculum, regardless of ZIP code.”

Yet, despite public support and the backing of legislative leaders, the bidding was done of Joe Biden, Kamala Harris, socialist Bernie Sanders, and the OEA/NEA union, which heavily opposed both school choice and President Trump and instead backed Biden and Kendra Horn.

Thankfully for the most vulnerable, there is now no reason for delay. In addition to public support, GOP lawmakers also have the numbers on their side. Republicans now hold 82 of the 101 seats in the Oklahoma House of Representatives, and 39 of the 48 seats in the Oklahoma Senate. It takes only 51 and 25 votes, respectively, to pass a bill in each chamber.

With this favorable environment for saving the lives and livelihoods of the most vulnerable through significant expansions of parental school choice, inaction will be impossible.

Posted by Brandon Dutcher at 9:17 AM No comments: