"The most vindictive resentment," Isabel Paterson understood more than 70 years ago, "may be expected from the pedagogic profession for any suggestion that they should be dislodged from their dictatorial position."

That resentment was on full display this week. FOX 23 reported on an Owasso High School teacher who was disgusted with Tuesday's election results, especially with the fact that Oklahomans elected people to office who favor school vouchers. This teacher told his students that Oklahomans have elected “uninformed, ignorant, racist pieces of [bleep].”

It's not the only time we've seen some rather startling language from Oklahoma educators who either weren't coping well with the election results or who resent educational reform.

English teacher Jennifer Williams, who is tired of "f*ing platitudes," says "people are generally such selfish assholes that they rarely surprise me." And after the election of Mr. Trump, she is especially critical of white people: "White people are the deliberately blind, ignorant, deaf, tunnel-visioned voters. ... Actually, it's been awhile since I was offended by anyone other than white people. ... I'm so incensed by white women I could actually do harm. ... Jesus, White women. If you're really wanting equality, it ain't comin' from your White men. Why do we need to completely sh*t on women of other races? Do you realize how stupid you are? ... [W]e are such competitive and power-grubbing bitches ... Why can't White men release their death grip on their power and the government and the nation? ... Whites are sucking the life from America, denying our country any possible chance at greatness. No one and nothing can ever be great if you've stolen, murdered, pillaged, and raped to achieve power."

For his part, Tulsa Union teacher Dallas Koehn hasn't been bashful about using words like "sh*tting on people," "a**hole," a "clusterf*ck," "shut the $%#&@ up," and "kiss my big fat angry blogging a**, you sick twisted lying $#%&ers."

Music teacher (and minister's wife) Mindy Dennison has instructed certain school-choice proponents to kiss her a**.

Tulsa teacher Cory Williams has no patience for state lawmakers who "can't seem to find their ass with both hands without taking money from education and giving it to oil companies."

Sand Springs administrator Rob Miller says "when I stumble upon a big steaming pile of festering crap I tend to say, 'Hey look, there’s a pile of sh*t.'"

Retired teacher Claudia Swisher, apparently believing hostility to be the best fundraising posture, instructs policymakers: "Fund us. Support us. Or STF (flip) U."

Mid-Del middle-school teacher Aaron Baker helpfully informs us that "public schools are the sh*t!" and celebrates the "strength to kick a**."

School-choice foe Mark McBride, a state lawmaker wholly owned by the teachers union and other education special interests, was upset with a black conservative who dared oppose McBride's anti-school-choice legislation. In a public setting in the Oklahoma state Capitol, McBride flipped off the conservative and called him the "f" word, a piece of s***, and a derogatory word for male genitalia.

Retired teacher Betsy Enis, not a fan of this article, pronounces it "total bullsh*t!" (She also doesn't like "Republican a**hole legislators.")

As we approach 2017, the taxpaying parents of 100,000 Oklahoma students, despite being compelled to pay for public education, have in effect said to public school officials: "Your product is sufficiently unattractive to us that you can't even give it away." Moreover, Oklahoma has enacted a private-school voucher program and a tax-credit scholarship program. And as we move ever closer to Rod Paige's vision of universal school choice—by expanding our current programs, enacting ESAs, providing for individual tax credits, and more—I suspect the vindictive resentment will grow.

What's especially disappointing is the hostility from some Oklahoma educators toward parents who want a faith-based education for their children. Rob Miller, for example, says: "If you are a parent who wants to use the Bible as your child’s Biology text, ESAs are for you." The online Oklahoma Education Journal posted a video with a similarly uninformed and uncharitable portrayal of Christ-centered education. The viewer will notice the unflattering setting and the mockery of "God’s Li’l Voucher School, Inc." which delivers "cutting-edge religious creation-science."

Happily, the vast majority of Oklahoma educators would never resort to vapid caricatures of private schools. (Indeed, 4 in 10 Oklahoma teachers would choose private or home education for their own children.) The vast majority of Oklahoma teachers would never refer to elected officials as "racist pieces of [bleep]." And that's good. Because parents want exemplary role models for their children, understanding full well that "a student is not above his teacher, but everyone who is fully trained will be like his teacher."

And speaking of role models, the following signs were seen at the 2018 teacher strike. Let us fervently hope that these people are not actually teachers: 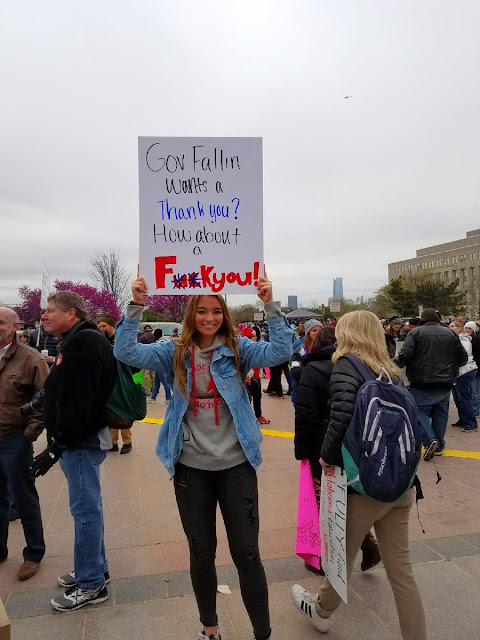 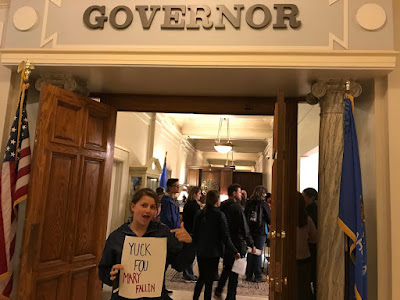 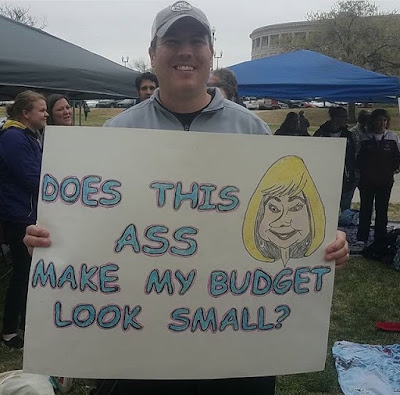 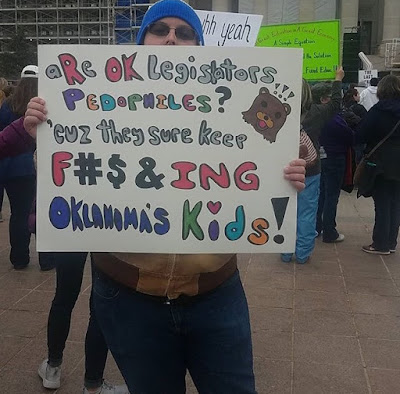 I realize this is the era of Trump, but why is Oklahoma's Democrat nominee for governor retweeting "GTFO"?

[This post has been updated to include colorful new quotes from #OklaEd boosters.]
Posted by Brandon Dutcher at 9:40 PM