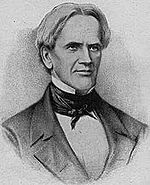 Of course Mr. Obama, a father of two, is merely the latest in a long line of public figures who champion public schools ... for other people's children. But until reading a new book by education professor Milton Gaither, I had no idea this grand tradition stretches all the way back to Horace Mann himself.

That's right, Horace Mann, generally regarded as the father of America's current public school system, was a homeschooler. "Ironically," Gaither writes, "some of the very people pushing so strongly for common schools that would raise the masses up ... were tutoring their own children at home out of a fear that these very masses would corrupt their own kids. One such individual was Horace Mann himself, whose wife Mary taught their three children at home even as he stumped the country preaching the common school. Mann's biographer Jonathan Messerli captures the irony well:

From a hundred platforms, Mann had lectured that the need for better schools was predicated upon the assumption that parents could no longer be entrusted to perform their traditional roles in moral training and that a more systematic approach with the public school was necessary. Now as a father, he fell back on the educational responsibilities of the family, hoping to make the fireside achieve for his own son what he wanted the schools to accomplish for others.

Posted by Brandon Dutcher at 5:40 PM