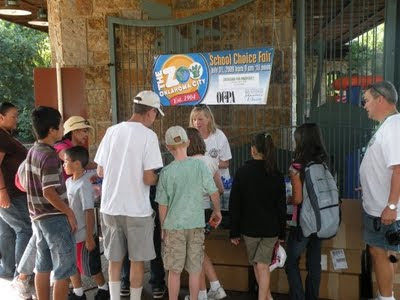 The late, great free-market economist Milton Friedman continues to influence public policy three years after his death. Few might have suspected that his historic life, during which he impacted cause-and-effect studies of business and government for decades, would so profoundly advance advocacy for people of modest means to access top educational services, including private schools and homeschool programs.

In honor of Friedman's birthday and lifetime legacy, on July 31 the Oklahoma Council of Public Affairs, Americans for Prosperity Foundation, and the Friedman Foundation for Educational Choice sponsored a School Choice Fair at the Oklahoma City Zoo. The event drew the hoped-for crowd of 300 private school patrons and prospects, as well as many passers-by who discussed education policy issues with the hosts.

This was a first-time program at the OKC Zoo. Those attending were given free child admission to the zoo as well as other treats provided by participating schools and program sponsors.

"The participating schools were pleased with the attendance and many asked that we hold the event again next year," according to Sandra Leaver, OCPA's events coordinator.
Posted by Brandon Dutcher at 10:11 PM

Email ThisBlogThis!Share to TwitterShare to FacebookShare to Pinterest
Labels: Events, Lighting a Candle