"Here's a story about three black Tulsans," Patrick McGuigan writes in this month's issue of Perspective. One of them is the late Wayman Tisdale.


A black Tulsan known for smiling through the pain is the late Wayman Tisdale, a man I never met. 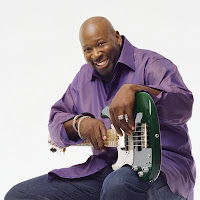 Last year, when the Knights of Columbus presented the John F. Kennedy award to Tisdale, posthumously, I learned more about the basketball superstar from the University of Oklahoma who went on to a successful NBA career, then superstar success in jazz. Tisdale may be best remembered for his heroic battle against cancer, to which he first lost his leg, and then his life.

At the Jim Thorpe Hall of Fame, Wayman’s brother, the Rev. Weldon Tisdale, represented the family and accepted the award.

Weldon remembered his sibling with deep affection as he accepted the JFK Award. Now pastor of Friendship Church in north Tulsa, he reflected, "You don’t have to tell me about the Knights, my family knows all about them." He thanked the Knights, and I learned the Tisdale boys (three of them, and Baptists) were graduates of grades 1 through 5 at the now-closed Immaculate Conception school. They got that education thanks to adults who loved them, and Knights in Tulsa.

After the event, I burrowed into the archives of the Tulsa World, and found a news story from 1988. The Tisdale boys (Wayman, Weldon, and older brother William) were on a sentimental journey. They were dedicating new basketball courts there at Immaculate Conception.

Wayman, then in his prime, told the World's Clay Henry, "I spent more years at this school than any other I've attended. The teachers here gave me the guidance I needed."

He said, "The teachers here didn't tell my folks all the things I did up here or I doubt I would be standing here right now. I was a fidgety kid. I liked to run around in class, throw stuff and yell. The teachers recognized that I was just a hyper kid with a lot of energy."

The Tisdale lads played a lot of basketball on the old courts at Immaculate Conception, but that was not what Wayman remembered: "It thrilled me more than anything to go play in the sandbox. I wanted to build sandcastles. I didn’t want to play basketball."

April 2011: The Knights in Oklahoma City cosponsored the first annual Wayman Tisdale Awards, presented by Devon Energy Corporation. ESPN legend Dick Vitale was given the Humanitarian of the Year designation for his leadership in raising money to fight the scourge of cancer. Young Jared Sullinger, the Ohio State University superstar, was named NCAA men's freshman basketball player of the year. A little star-struck, I shook hands with Toby Keith, and embraced Wayman's beautiful widow, Regina.

But the personal highlight of that evening came when I saw Weldon. Before I could remind him of the Knights connection, the preacher gave me a great big hug, that glorious Tisdale smile, and said, "Hello again, brother."

Brother. That meant a lot.

I never knew Wayman personally, but I know him a little more every day.

I know his roots in a community that believed in him, and ultimately loved him. His experiences at a Catholic school his family chose, a place that taught discipline, and let him be a little boy with possibilities. Wayman Tisdale was a lad nurtured in love, an optimist with dreams rooted in good education and hard work.

Posted by Brandon Dutcher at 4:58 PM