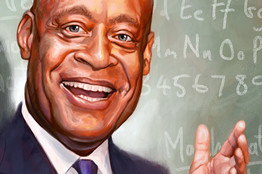 Over the weekend in The Wall Street Journal, Allysia Finley had a great piece ("On the School-Choice Barricades") about former D.C. councilman Kevin Chavous, a founding board member of the nonprofit American Federation for Children (AFC).

Mr. Chavous, who gave an impassioned address to a group of Oklahoma lawmakers on a school-choice fact-finding trip to Arizona last year, is doing battle with teachers unions and fighting for school choice across the country. Finley writes:

"It's like a tale of two Americas on school choice," says Kevin Chavous. There's the status quo that includes the teachers unions and their allies. "And then there's the other America" — those "who have to suffer every day because their kids aren't getting the education they deserve."

By his lights, school choice is a war between the "haves" and "have-nots." "The only people fighting educational choice are the people who have educational choice," notes the former Washington, D.C., councilman.


AFC is involved in elections across the country, and Finley notes that "all six candidates AFC endorsed in Oklahoma's legislative primaries won."

Posted by Brandon Dutcher at 10:58 AM