In a recent column published in The Oklahoman ["Oklahoma’s (missing) $8,872 teacher pay raise"], economist Benjamin Scafidi cited federal data showing that a decades-long employment surge of non-teaching staff (in Oklahoma and nationwide) has far outpaced student enrollment growth. Scafidi, who earned his Ph.D. in economics from the University of Virginia, is a professor of economics at Kennesaw State University. He is also a Friedman Fellow with EdChoice, a nonprofit organization founded by Milton and Rose D. Friedman.

One commenter is not a fan of Dr. Scafidi's article: 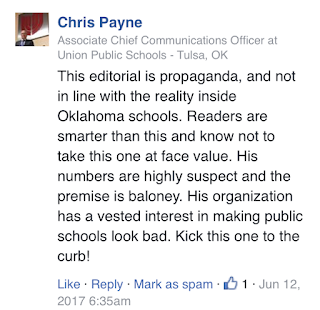 If nothing else Mr. Payne's comment should elicit a wry smile. Scafidi makes the case that teachers haven't gotten pay raises because non-teaching bloat has swallowed up the money. Then, as if to prove Scafidi's point, straight out of central casting comes a critic: a generously compensated non-teacher with a title that could have come from one of those parodic bureaucratic-job-title generators. Unlike teachers in the Union school district, Mr. Payne receives an annual salary of $99,220—as well as a six percent on-call stipend, paid teacher retirement of seven percent, a paid life insurance policy of $80,000, paid health, dental, and disability insurance, and 20 days of vacation.

(1)  He says Scafidi's article is "not in line with the reality inside Oklahoma schools." But according to the latest data reported by the Oklahoma State Department of Education to the National Center for Education Statistics at the U.S. Department of Education, Union has more non-teachers (1,036) than teachers (828). Why is that? And why did Union's non-teaching staff grow by 150 percent over the past two decades while the number of students increased by 49 percent?

(2)  He says Scafidi's "numbers are highly suspect." How so? After all, they are numbers reported by the Oklahoma Department of Education to the U.S. Department of Education. Is Payne implying that Oklahoma bureaucrats have done something suspicious? Federal bureaucrats? Dr. Scafidi? A drive-by accusation is not sufficient; if Payne believes the numbers are suspect, he should explain why.

(3)  He says Dr. Scafidi's "premise is baloney." Again, please elaborate: What is his premise, and why is it baloney?

(4)  He says Ed Choice "has a vested interest in making public schools look bad." Here's what EdChoice says in its latest publication of Dr. Scafidi's findings:


EdChoice is committed to research that adheres to high scientific standards, and matters of methodology and transparency are taken seriously at all levels of our organization. We are dedicated to providing high-quality information in a transparent and efficient manner. ... All individuals have opinions, and many organizations (like our own) have specific missions or philosophical orientations. Scientific methods, if used correctly and followed closely in well-designed studies, should neutralize these opinions and orientations. Research rules and methods minimize bias. We believe rigorous procedural rules of science prevent a researcher’s motives, and an organization’s particular orientation, from pre-determining results. If research adheres to proper scientific and methodological standards, its findings can be relied upon no matter who has conducted it. If rules and methods are neither specified nor followed, then the biases of the researcher or an organization may become relevant, because a lack of rigor opens the door for those biases to affect the results. The author welcomes any and all questions related to methods and findings.

Again, Payne's vague drive-by accusation is unsatisfactory. Is he implying, as with the "propaganda" and "highly suspect" remarks, that Scafidi's research is inaccurate?

My colleague Trent England will be discussing these matters on his radio program. (Be sure to listen to Trent weekday mornings from 7:00 to 9:00 on AM 1640 The Eagle, with the TuneIn app on your phone, or at KZLSAM.com.) If Mr. Payne would like to elaborate on his comment, he has an open invitation to do so on The Trent England Show.


One more question. Despite Union's per-student spending of $11,566 (higher than it was a decade ago, even when adjusted for inflation), the average Union student is performing better in math than 55 percent of students in Oklahoma, 49 percent of students in the nation, and only 38 percent of students in other developed economies. Is this performance good enough to justify the Union superintendent's total annual compensation of $238,728?
Posted by Brandon Dutcher at 11:43 AM