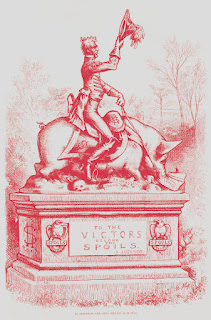 
The power of entrenched education special interests is not only, or even primarily, in the money collected through such means as union dues. The single greatest political obstacle to education reform is the large number of people who get their jobs from the status quo, and will therefore show up during elections to vote and volunteer for politicians who will protect the status quo. ...

Every smart legislator finds out who the big employers in their district are and pays close attention to their concerns. This isn’t primarily about seeking to please the employers in hopes of getting their campaign donations (although it is that, too); it’s primarily about seeking to please the employees in hopes of getting their votes. And in virtually every legislative district in the United States, one of the biggest local employers is the government school monopoly.

This system gives us what we might call "reverse patronage." In the 19th century, under the patronage system, hiring and firing in most government jobs was directly controlled by political officeholders. Politicians in each party would hire their party’s people to staff the government from top to bottom. (On one famous occasion, Abraham Lincoln kept his Civil War generals waiting while he attended to more important business: deciding which party faction to give control of a Post Office appointment.) Each change of party would bring massive turnover. This was also called the “spoils system” because government jobs were like the spoils of war for whoever won the election.