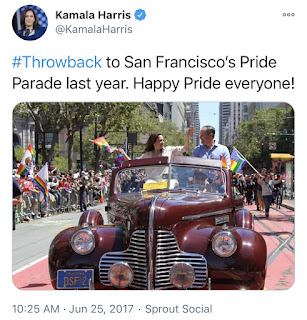 [Guest post by Jonathan Small]
If Oklahoma wants to stop the socialist and anti-American offensive being waged by politicians like Kamala Harris and Nancy Pelosi, Oklahomans must act to “Kamala-proof” what is being taught to Oklahoma kids.

Consider the dangerous rules adopted by the Democrat leadership of the U.S. House of Representatives. Under those rules, House legislation will no longer refer to a father, mother, son, daughter, brother, sister, nephew, niece, husband, wife, etc. Instead, legislation will use phrases such as parent, child, sibling, parent-in-law, and child-in-law.

The new House rules even ban the use of the words “himself or herself” and instead mandate that “themself” will be used instead.

Democrats don’t want to “risk” referring to someone as male who wants to be referred to as female, regardless of biological reality. In fact, U.S. House Democrats and some Oklahoma Democrats are trying to force boys and men in girls’ bathrooms and males in girls’ sports.

To her credit, Oklahoma Congressman Stephanie Bice, a mother of two girls who represents Oklahoma’s 5th Congressional District, saw right through the scheme and voted against this insane rule.

But don’t think this danger is confined to D.C. Indeed, Democrats in the Oklahoma House of Representatives tried a similar scheme this week and tried to bring a version of Pelosi’s rules to Oklahoma.

Where does such dangerous, anti-science, and destructive thinking start? It starts in big unions like the Oklahoma Education Association, which opposed Congressman Bice, endorsed far-left Democrat Kendra Horn as well as team Joe Biden and Kamala Harris, and is proliferated in urban K-12 public schools and “higher-education.”

The assault on uplifting American values and our kids must be stopped. The best way to stop it is to give parents and students a lifeline out of environments that are trying to force socialist, anti-American views overtly and subversively on our kids.

Oklahoma Republican lawmakers can and should address this threat in this year's legislative session. They can do this by giving parents control over where their kids are required to go to school.

Lawmakers can give any parent who wants it the option to change their child’s school to the public or private school of their choice by letting their tax dollars assigned for their child’s education follow the child to the school of the parent’s choice. We allow this kind of choice and parental control in many other government programs. It’s time for that to apply in K-12.

If we want to stop the spread of anti-American and anti-Oklahoma values in Oklahoma by the socialists in D.C., if we want to prevent rural Oklahoma from having to subsidize and be negatively impacted by the indoctrinating insanity going on in public education in Oklahoma City and Tulsa, it’s time to give control to parents and to Kamala-proof Oklahoma.

Posted by Brandon Dutcher at 10:58 AM

Email ThisBlogThis!Share to TwitterShare to FacebookShare to Pinterest
Labels: Democrats, Republicans, Worldviews in the Classroom