Takings Coalition waking up to the dangers of SQ 744

In a visit last year to OCPA, conservative impresario Grover Norquist reminded his listeners that the modern American left can be thought of as a "Takings Coalition," a coalition of groups who view the proper role of government as taking money from people and giving it to other people to whom it doesn't belong. Says Norquist: "The Takings Coalition consists of the trial lawyers, the corrupt big-city machines, the labor union bosses, and the two wings of the dependency movement -- those who remain trapped in dependency and those who make $80,000 a year managing the dependency of others and making sure they don't get jobs and become Republicans." 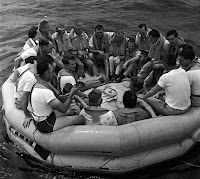 Now where it gets interesting is when the budget gets tight and these various tax eaters start crowding each other at the trough. It's at this point, Grover pointed out, that they all start eyeing one another like the proverbial starving men in the lifeboat.

Which is why it didn't come as a total surprise to me when Ed Allen, president of the Oklahoma City affiliate of the American Federation of Teachers, wrote a column opposing the OEA's proposed ballot initiative to hike school spending. Keep in mind that the AFT is part of the larger AFL-CIO. As Allen pointed out, the OEA plan would result in an $850 million loss to state agencies, and "unless the state receives a windfall in additional revenue, 12 percent across-the-board budget cuts for every agency will need to occur."

We cannot waive our responsibility to our most fragile citizens -- the old, the sick, the poor and the hungry. They depend on help with nursing home care, family health services to keep their children healthy, and in some cases they need the most basic necessity, food. These Oklahomans that most of us don't see on a regular basis can't take a 12 percent cut. The AFT will never support a proposal that leaves people behind with the sick becoming sicker and the poor made poorer.

Also left behind are state workers and their families, roads and bridges, corrections, public health and safety, and higher education, to name just a few. The simple truth is that large cuts will be made in every state agency unless current taxes or new taxes fill the $850 million loss.

The Oklahoma Education Association is pushing the Helping Oklahoma Public Education (HOPE) ballot initiative for a vote of the people in the 2010 general election.

If passed, SQ 744 would constitutionally mandate per-pupil spending in Oklahoma be based on a regional state average. By the OEA's numbers this would shift $850 million of Oklahoma's existing revenues to Common Education.

TRUST is working with a broad coalition to begin educating Oklahomans on the catastrophic effects SQ 744 would have across all critical areas of state government, as well as the need to defeat SQ 744.

Posted by Brandon Dutcher at 8:59 AM