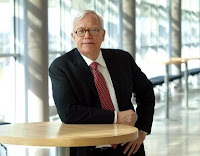 Dr. Heckman said school choice "engages both the private sector and the public sector in production of ideas to meet educational needs." He said choice is based on the idea that there are, or ought to be, "multiple, diverse modes of delivery. The process of experimentation is necessary, to involve the private sector in development." Heckman said "the early years of education are decisive" for children, and "there is a concern about imposition of a universal template" in educational policy, a "fear of one size fits all."

School choice "has a role, competition plays a role" in good education policy, said Dr. Heckman, a professor of economics at the University of Chicago who won the 2000 Nobel prize in economic sciences. He said private-sector involvement will assure that private money and financing is made available for education needs, including early childhood education, "especially in times of economic challenge." Heckman said choice in education demonstrates "respect for cultural diversity," and is a way to "improve funding and performance."

The early years are "a delicate time of life, when cognition and self-control [are] established," he said. When education choice is permitted, "religious groups can pick for themselves" how to meet those needs in development of a child's cognition and self-control. He said such programs can and should accommodate the interests of "Orthodox Jews, Mormons, Southern Baptists, you name it."

Dr. Heckman pointed to an early learning foundation scholarship program in Minnesota which, he said, brings "state and private money into early childhood education." The program helps parents make informed choices, in part because parental involvement is a requirement for children to access the program.

Dr. Heckman gave his analysis during a press conference before the summit. He was one of the keynote speakers today at the Oklahoma Economic Summit on Early Childhood Investment. The summit, sponsored by Smart Start Oklahoma, was held at the Skirvin Hilton Hotel in Oklahoma City.
Posted by Brandon Dutcher at 2:48 PM