At its annual convention this month, the National PTA adopted a resolution on the Recognition of Lesbian, Gay, Bisexual, Transgender and Queer/Questioning (LGBTQ) Individuals as a Protected Class. According to a press release, "National PTA and its constituent associations will advocate for legislation that explicitly recognizes LGBTQ as a protected group and addresses discrimination based upon sexual orientation, gender identity, and gender expression."

One of those constituent associations, the Oklahoma PTA, promptly did its part by retweeting this: 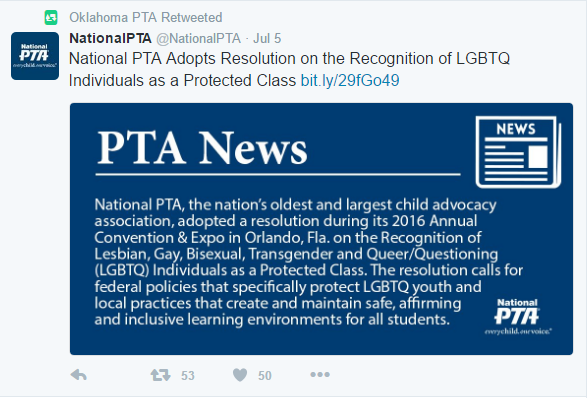 It's no secret that the transgender revolution has already made its way to Oklahoma. For example, Tulsa Public Schools—which recently had a gay pride flag flying outside of its headquarters—has trained teachers on the subject of "gender nonconformity" issues, including which bathrooms transgender children are allowed to use. And this was before the Obama Administration's bathroom decree (Commode Core, it's been dubbed), which essentially, in David French's words, enlisted "every single public educational institution in the country to implement the extreme edge of the sexual revolution."


If some of the Oklahoma PTA's Twitter posts are any indication, the organization appears to be on board with the revolution: 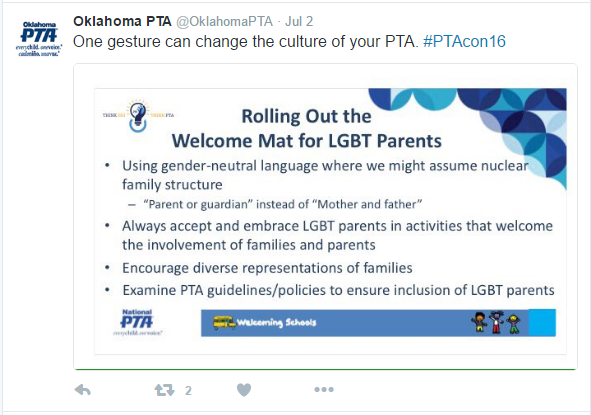 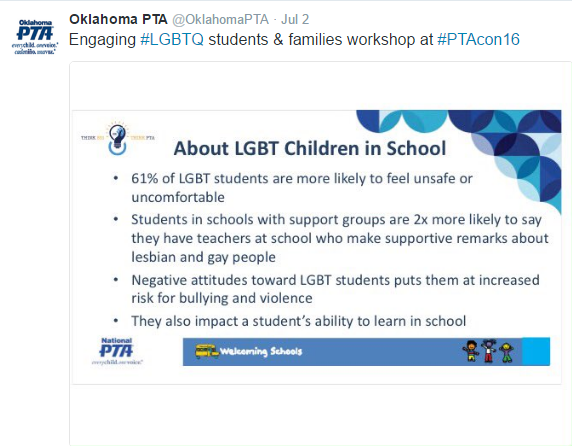 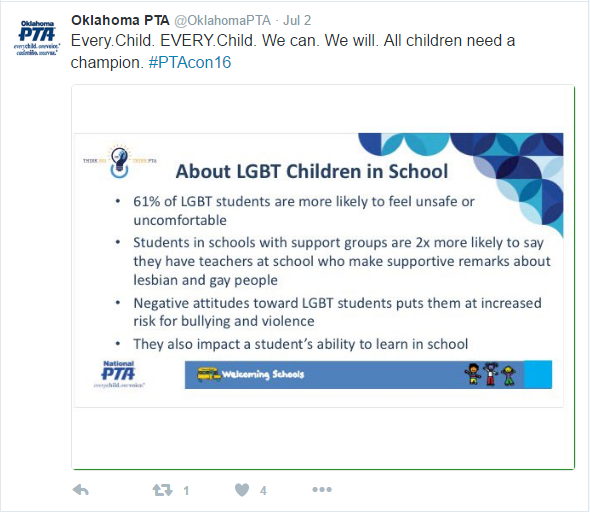 It is worth noting that not everyone believes it is wise to treat LGBTQ persons as a protected class. In a memorandum titled "Sexual Orientation and Gender Identity (SOGI) Laws Threaten Freedom," Heritage Foundation scholar Ryan T. Anderson explains:

All citizens should oppose unjust discrimination, but sexual orientation and gender identity (SOGI) laws are not the way to achieve that goal. SOGI laws are neither necessary nor cost-free. They threaten fundamental First Amendment rights. They create new, subjective protected classes that will expose citizens to unwarranted liability. Furthermore, SOGI laws would increase government interference in labor, housing, and commercial markets in ways that could harm the economy. Yet SOGI’s damage is not only economic: It would further weaken the marriage culture and the freedom of citizens and their associations to affirm their religious or moral convictions, such as that marriage is the union of one man and one woman and that maleness and femaleness are not arbitrary constructs but objective ways of being human. SOGI laws would treat expressing these widely held beliefs in certain contexts as unlawful discrimination.

Posted by Brandon Dutcher at 8:44 PM

Email ThisBlogThis!Share to TwitterShare to FacebookShare to Pinterest
Labels: #WWFschool, Worldviews in the Classroom

Never i my life did I think because of someone's sexual preference or transgender want that it would be qualifications for a job,military, or my children and grandchildren being safe in school and this world! I don't go around telling people I'm heterosexual! This is discrimination because of someone's sexual lifestyle. God says this is an abomination! It's time we stand and fight these small organizations that want to destroy good!