Is white privilege a problem? 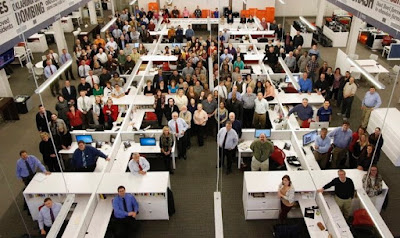 Is white privilege a problem in education? Reporters for the state's largest newspaper (newsroom pictured here) recently examined the makeup of the state board of education and the board of regents, as well as three other statewide boards. They determined that "most members are white."

These sorts of diversity stories are nothing new. Liberal activists with bylines take great pride in writing them. Indeed, in another story yesterday ("Reflecting OKC? Boards, commissions don't show much diversity"), The Oklahoman reported: "In a city that is becoming increasingly diverse, the boards, commissions, and trusts that shape almost all municipal policy in Oklahoma City have a glaring lack of diversity. Nearly 90 percent of the members who serve on these boards are white."

Photo credit: Doug Hoke
Posted by Brandon Dutcher at 9:29 AM