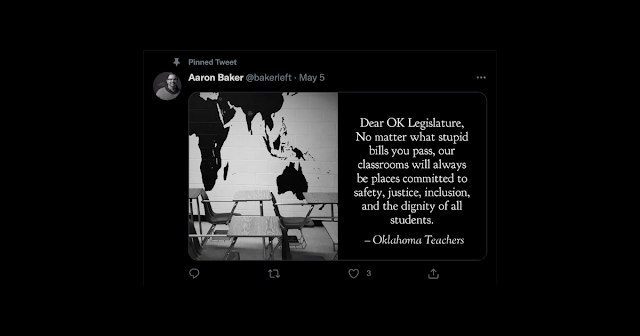 Throughout the debate over Critical Race Theory, or CRT, education officials have insisted CRT is not part of classroom instruction. Now the National Education Association (NEA), the parent organization of Oklahoma’s largest teachers’ union, has made clear that was a lie.

At the NEA’s recent annual meeting and representative assembly, delegates voted to promote and support CRT in the classroom. One business item explicitly called for “increasing the implementation” of Critical Race Theory and similar material in “curriculum in pre-K-12 and higher education.”

Another measure required the union to “identify, compile, and share” existing “decolonizing the curriculum” resources with “educators seeking to be anti-racist in their classrooms.” Another item called on the union to share and publicize “information already available on critical race theory” and have “a team of staffers” dedicated to helping union members “fight back against anti-CRT rhetoric.” That proposal also required the union to make clear the union’s members “oppose attempts to ban critical race theory and/or The 1619 Project.”

You don’t devote that much time, effort, and resources to defending and promoting something that doesn’t exist.

Fortunately, Oklahoma lawmakers have taken a stand against Critical Race Theory in public schools. A new state law, House Bill 1775, bans Oklahoma public schools from teaching concepts associated with CRT, including that “an individual, by virtue of his or her race or sex, is inherently racist, sexist or oppressive” and should therefore face discrimination.

The focus now shifts to effective enforcement, which requires swift action by the State Board of Education. The board must approve agency regulations that will guide how the State Department of Education addresses instances in which teachers ignore the law. As chair of the board, State Superintendent of Public Instruction Joy Hofmeister controls the state board’s agenda and should make certain this issue is addressed.

Critics continue to insist Critical Race Theory is not part of classroom instruction in Oklahoma schools. But some Oklahoma teachers and administrators have publicly signed petitions vowing they will ignore HB 1775’s prohibitions.

Again, if you’re not teaching students that they are “inherently racist, sexist, or oppressive” based on their skin color or gender, why would obeying HB 1775 be objectionable?

Given the NEA’s open embrace of Critical Race Theory and the insistence of some Oklahoma teachers that they will disregard a law saying children should not be taught that individuals “should be discriminated against or receive adverse treatment solely or partly because of his or her race or sex,” it is undeniable that the threat of government-sanctioned racism in the classroom is a reality.

Our nation has made great strides in race relations since its founding. To allow CRT in the classroom would surrender those gains and dishonor the memory of countless Americans of all races who led the way on civil rights.

Posted by Brandon Dutcher at 8:58 AM