Congressman throws in the towel 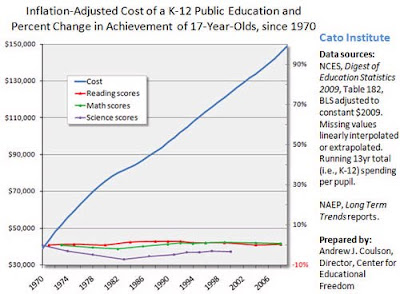 Spending more money on education doesn't necessarily translate into better student performance. Conservatives have been saying that for years, of course, and of late even some prominent liberals are saying it (e.g., this big-time lefty documentarian, this famous community organizer, this Newsweek columnist, and this Soros-funded think tank).
Comes now a Democrat Congressman who just flat throws in the towel:

I think when you look at student performance and you look at money and you want to say that somehow there should be some correlation there I think that’s wrong-headed.

Posted by Brandon Dutcher at 1:01 PM