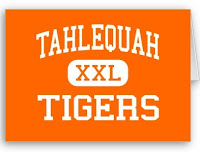 Tahlequah Public Schools superintendent Shannon Goodsell, who is paid $124,858 annually to oversee a school district on the federal needs-improvement list, is not a fan of school vouchers. Among other things, he raises the issue of accountability:

The only entity the private school is held accountable to is Mom. If Mom is happy, the money stays with the school. If Mom is not happy, then Mom has the right, if she wants, to pull them out and put them back into the public schools ...


That is very well said, though, oddly, Mr. Goodsell appears to think it's an argument against vouchers.

In short, let's say everyone acknowledges the obvious: the Tahlequah Public Schools desperately need improvement. To whom are these educators accountable? Ah yes, and how is that accountability to distant bureaucrats working out for Mom, who can only watch as another year goes by and her son's childhood continues to slip away?

As the late Steve Jobs once said: "I remember seeing a bumper sticker with the Bell [telephone] logo on it and it said 'We don't care. We don't have to.' And that's what a monopoly is. That's what IBM was in their day. And that's certainly what the public school system is. They don't have to care."

No, they're going to get paid whether Mom is happy or not. They're not accountable.
Posted by Brandon Dutcher at 8:34 PM

We are very proud of our student's accomplishments. Tahlequah Public Schools has a dedicated staff that is committed to serving children. We have much to celebrate.

The use of voucher systems is a direct violation of the Oklahoma Constitution. Public funds are to be used for PUBLIC benefit not for the benefit of a select few. Additionally Tahlequah Public Schools is both accountable and transparent for the dollars allocated for education. The lack of both accountability and accreditation standards for private schools with regards to public funds is very concerning.