Legislators looking out for taxpayer interests 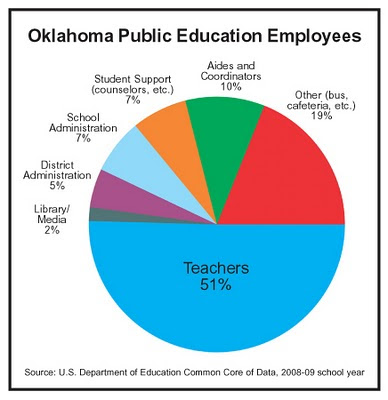 "Here’s an eye-opening school statistic for you," Greg Forster wrote in an OCPA article this year. "Only half of Oklahoma’s public education employees are teachers. The bureaucracy is now so big, it takes up half the system. It’s the blob that ate the schools."

To his great credit, state Rep. David Brumbaugh (R-Broken Arrow) is trying to do something about it. The Oklahoman reports today that "Brumbaugh told members of a budget subcommittee on education that legislators should encourage public school districts to privatize food services as well as medical services and janitorial services. Contracting out transportation services also could be considered." After all, as Dr. Forster pointed out,

There's absolutely no reason for any sector of government to directly employ bus drivers, cafeteria workers, janitors, or any of the rest of this category. The whole enchilada needs to be privatized posthaste. You wouldn't just eliminate unnecessary positions that are there due to featherbedding, although that's considerable. More important, though, you’d be able to pay the market rate for the positions you kept, instead of hyperinflated civil-service salaries and benefits (think pensions). And you’d be able to fire people if they didn’t deliver good services.

Unfortunately, not everyone agrees with this assessment. State Rep. Ann Coody (R-Lawton) said a school district in her area tried to privatize janitorial services. "It was a disaster," she said. "It was not effective at all. Our school custodians take great pride in their work."

Just a guess here, but if Republicans can't even pluck this low-hanging fruit, my guess is they won't be showing a lot of interest in the new Heritage/AEI study which concludes that American public-school teacher salaries are $120 billion over market value.

Even so, Rep. Brumbaugh and other conservatives in the legislature deserve credit for their continued attempts to protect taxpayers.

Posted by Brandon Dutcher at 10:34 AM