'Administrative costs' and other eye-catching numbers

Where does Mr. Owens get this figure? Well, as the school monopoly folks like to remind us, "Section 18-124 of Title 70 of the Oklahoma Statutes defines administrative costs in public schools and establishes caps on the amount of the funds districts can use to pay for central office administrators and staff. These costs are typically referred to as 'administrative costs' in rhetoric regarding education funding."

But as Dr. Greg Forster has pointed out ("Yes, Oklahoma, There Is Bloat in Public Schools"), this definition of "administrative costs" is misleading. Indeed, could it be that "states have an incentive to tweak their official definitions in ways that reduce the amount of spending that gets called 'administrative'"? After all, "they look a lot better when that number is lower, and most people don’t stop to check the definitions." Dr. Forster continues:


The data-gathering arm of the U.S. Department of Education sets its own definitions for categories of spending. This is useful for making valid comparisons across states, but it also reduces the danger of shenanigans in the definitions. Where government agencies are collecting data on government systems you can never fully escape self-serving incentives, but in my experience the federal education data professionals have a reasonably good track record of playing it straight. So it’s useful to turn to their data and see what they say Oklahoma spends.

However, there are even more eye-catching numbers elsewhere in the public school budget. Most Oklahomans would probably be shocked to learn that only 51 percent of public education spending in their state goes to what is supposed to be the core function of schools: instruction. The rest goes not only to administration but to a variety of "support services" and "other expenditures" like guidance counselors, nurses, buses, and cafeterias.

This imbalance is also reflected in the education workforce. Only half of Oklahoma’s public education employees are teachers. In fact, the most up-to-date staffing statistics reveal that, after hovering just above the half-teachers mark in recent years, Oklahoma has now fallen a tiny bit below it in 2011-12. Only 41,349 of the 82,719 FTE public education employees in Oklahoma are teachers. The rest are administrators, aides, guidance counselors, nurses, bus drivers, cafeteria workers, etc. (On all these figures, Oklahoma is roughly in line with the nation at large.)

Why carry all these inessential services on the public payroll? ... It’s so their unions can keep the dues money rolling in. The unions, in turn, ensure political protection for their monopoly by mobilizing their members as voters in elections for legislatures and school boards. Politicians in both parties and the government school unions look out for each other, and everyone wins — except for the rest of us.

Oklahomans know what they know. I recently had a state lawmaker tell me that, almost without exception, this little thought-experiment resonated powerfully with constituents on the doorstep: 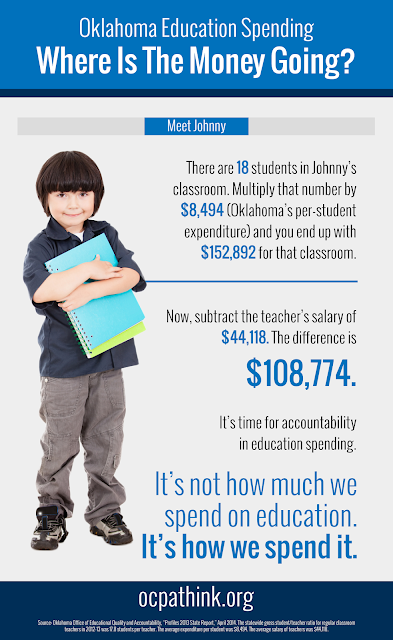 Posted by Brandon Dutcher at 11:42 AM