Supporters of parental choice in education should be pleased with last night's election results, as a press release from the American Federation for Children (AFC) makes clear.

In Senate District 25, "AFC supported Joe Newhouse over his opponent Lisa Kramer. Newhouse is a U.S. Navy fighter pilot who campaigned as a supporter of public education and school choice, including education savings accounts or ESAs. Newhouse’s opponent opposed school choice and as a member of the Bixby School Board voted to defy the law and deny students with special needs access to state-funded scholarships. In the end, SD 25 voters strongly supported Newhouse’s optimistic message of school choice over Kramer’s indifference to children with very serious challenges."

The result shouldn't be surprising—by now it's no secret that Republicans support school choice—but still it seemed like it would be a close race. It wasn't until I saw the kiss-of-death endorsement from the Tulsa World telling Republicans to vote for the longtime Democrat Kramer that I knew this race would indeed be Melissa Abdo 2.0. Incidentally, some folks profess to be quite upset about "dark money" (also known as "First Amendment money") when it helps pro-school-choice candidates but seem blissfully unconcerned when it helps anti-school-choice candidates.

In House District 67, "AFC supported Scott McEachin in the runoff. McEachin is an attorney and longtime Republican activist who campaigned on boosting teacher pay without tax increases and supporting school choice, namely ESAs." OCPA trustee Tom Coburn endorsed McEachin, and some OCPA staff and family members made weekend treks to Tulsa to knock doors for him. McEachin's opponent was surprisingly vocal in his opposition to school choice, almost as if he thought he was involved in a Democratic runoff. In other words, he chose a position contrary to Ronald Reagan and James Lankford and Mary Fallin and Todd Lamb and Scott Pruitt and Jim Bridenstine and the state and national GOP platforms. And, he lost the GOP runoff 56.44 percent to 43.56 percent. Ouch. 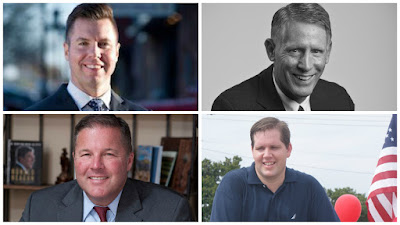 "Tonight’s victories follow an impressive showing by pro-school choice candidates in the June primaries where 12 out of 15 bipartisan candidates supported by AFC either won their election outright or advanced to a runoff election," AFC says.

UPDATE: Though AFC says Adam Pugh supported ESAs in writing, journalist Patrick McGuigan now reports that Pugh appears to have changed his position. At the 2:00 mark below, McGuigan discusses the matter with Alex Cameron of the CBS affiliate in Oklahoma City:

Posted by Brandon Dutcher at 7:56 AM