In 2017, SB 301 expanded the eligibility for this voucher program. Formerly limited to students on an IEP, eligibility now extends to children in foster care (a 2015 OCPA recommendation) and children adopted out of state custody. Click here to see how your state senator voted. Click here to see how your state representative voted. [Updates: State Sen. AJ Griffin discusses the legislation here. Oklahoma Watch reports on the legislation here.] 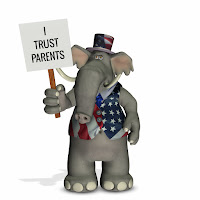 It should come as no surprise that a Republican government would expand parental-choice options. The GOP platforms, both nationally and in Oklahoma, place a strong emphasis on parental rights and educational choice. Moreover, no fewer than seven public-opinion surveys conducted by reputable polling firms over the last few years have shown strong support for school choice among Republican voters. This, of course, helps to explain why Republican political leaders support school choice. Most notable are President Donald Trump and Vice President Mike Pence. (They are embracing the views held by the great President Ronald Reagan, who in his day proposed "a tuition tax credit plan," "a voucher system," and "education savings accounts.") Here at home, Sen. James Lankford, Lt. Gov. Todd Lamb, Gov. Mary Fallin, and others support educational choice.

Given those realities, it's disappointing that school choice hasn't made even more progress. "I think Oklahoma has been way too slow" at expanding school choice, Scott Pruitt told me in 2015. "It's shocking to me, when you look at the individuals that make up our legislative bodies, how most of them are conservative in their viewpoint, they ought to be seizing this opportunity—now—to make Oklahoma the most choice-friendly state in the country."

Unfortunately, that hasn't happened, in part because many of the Republicans in our legislative bodies arrived via the Trojan Horse dragged in by GOP campaign consultants. Regrettably, these operatives are more concerned with collecting lucrative fees than with electing candidates from the Republican wing of the Republican party. And school choice hasn't been the only casualty: Republican politicians, claiming there's a budget "crisis," also continue to raise taxes and increase government spending—even though the CAFR tells us (on page 193) that total state spending is at an all-time high. (You likely didn't know that—but you would if journalists would report the news fully, accurately, and fairly.)

Still, kudos to Oklahoma's political leaders for taking these baby steps toward securing parental rights. There's much more work to be done. All parents have the moral right to direct their child's path. As private-school choice advocate Martin Luther King III says, "fairness demands that every child, not just the rich, has access to an education that will help them achieve their dreams."
Posted by Brandon Dutcher at 3:19 PM