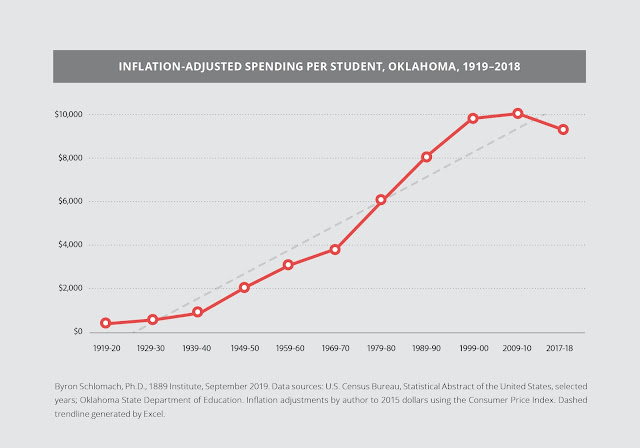 In recent years, status-quo forces have described Oklahoma’s 2009 per-pupil funding level as a goal for state spending and argued that the slight reduction in per-pupil appropriations experienced following 2009 is to blame for the state’s education problems.

Rep. Melissa Provenzano, D-Tulsa, is the latest example of this pattern. Provenzano told The Oklahoman she opposes making the state superintendent a gubernatorial appointee, and implied the focus should be simply on spending increases.

“The state of education in Oklahoma, and the work that we’re going to have to do to even get it back to where it once was, is a direct result of severe underfunding by the state Legislature for well over a decade,” Provenzano said.

If spending equals better results, then 2009 should be a high-water mark for educational outcomes in the state. It’s not.

The National Assessment of Educational Progress (NAEP), often called the “nation’s report card,” shows fourth grade reading and math scores in 2009 were basically the same as in 2019.

Put simply, 2009 levels of spending generated the same basic results as 2019 spending. That doesn’t fit the narrative of those who want no changes in Oklahoma schools’ oversight or expectations.

Neither does the fact that the 20-percent increase in Oklahoma school appropriations over the last two years has had no notable impact on outcomes. Instead, academic results declined in 2019 on NAEP, state academic tests, and the ACT college-entrance exam.

Also contrary to the “only spending matters” crowd, the biggest improvement in outcomes occurred even as education appropriations declined slightly. In 2015, NAEP found 33 percent of fourth graders read at grade level or better.

One reason that reading outcomes improved in 2015 even as per-pupil spending was at a standstill or declining slightly is that lawmakers raised expectations. A law in force at that time ended social promotion and required students to repeat the third grade if they read at a first-grade level or lower. (That law has since been watered down and outcomes have fallen as a result.)

Money matters, but government structure, accountability, and academic expectations matter too. Under Oklahoma’s current system, gubernatorial candidates from both parties campaign on education issues, but their ability to implement their vision is hampered by their lack of authority over the Department of Education.

Giving the governor authority to appoint a state superintendent will guarantee direct accountability. If things go wrong in Oklahoma schools, the governor will be on the hot seat. Under our current system, no one is really in charge.

Ask yourself: Which system do you think is most likely to generate better academic outcomes? The answer is obvious.
Posted by Brandon Dutcher at 9:10 AM