Demography is not destiny


"The needs of Oklahoma children have become more complex and more difficult … In 1990 Oklahoma’s student poverty was 35 percent, overwhelmingly Caucasian and schools were educating 577,000 students. In 2010, schools served about 650,000 students with a poverty rate of 60 percent. Caucasian students now have a slight majority in the Oklahoma student population and the numbers of students who are homeless, speak English as a second language and/or are in foster care/state custody are astonishing."

Disadvantaged students have typically performed at lower levels on standardized tests, have lower graduation rates, and as a result are ill-prepared as they enter the workforce. This, according to state Superintendent Sandy Garrett, is a primary challenge facing Oklahoma’s educators as the demographics of Oklahoma’s students become increasingly diverse.

Yet despite the challenges of a shifting demographic, good news comes from the Sunshine State. Thanks largely to the leadership of then-Governor Jeb Bush, Florida has seen remarkable improvement among its students' standardized test scores, especially among disadvantaged students. How is this so? The answer lies in Florida’s embrace of comprehensive school reforms, including school choice.

Compare the education policies of Oklahoma and Florida over the past decade and the difference is clear. While Florida got innovative and expanded its use of charter schools, vouchers, and virtual education (Florida has the largest virtual school in the nation), allowing the unique needs of disadvantaged students to be met, Oklahoma resisted needed reforms to education and instead created a lottery.

The figures below show the results of each state’s efforts in education. And they help to illustrate that demography isn't necessarily destiny. 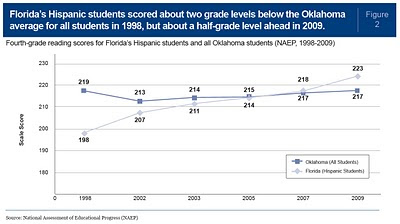 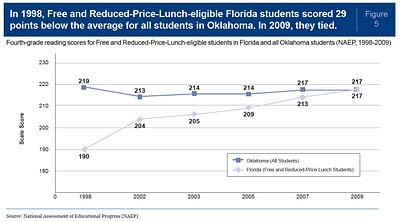 Posted by Brandon Dutcher at 8:05 AM