Schools in the slums 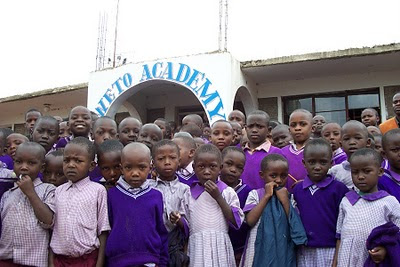 Ten years ago James Tooley, a professor of education with a doctorate and a World Bank grant to study private schools in a dozen developing countries, took the standard path toward helping the poor: He flew first class and stayed at 5-star hotels.

But something happened in India as he visited private schools and colleges that cater to the privileged. At night, lying on 500-thread-count Egyptian-cotton sheets, he meditated about the "con" that he was now part of: Wealthy Indians enjoy foreign aid because they live in a poor country, the poor fall further behind, and the researchers live richly.

Then Tooley broke the rules. With guilt feelings and some spare time, he actually went into the slums instead of riding past them with his driver. He was surprised to see little handwritten signs announcing the existence of private schools: He thought private schools are for the rich. Guided through alleys and up narrow, dark, dirty staircases, he entered classrooms and found dedicated teachers and students.

Tooley found schools that survive not with government money or international bequests, but through $2-per-month fees paid by rickshaw pullers who scrimp and save to give their children a chance not to pull rickshaws. He went on to visit 50 Indian private schools in poor areas over the next 10 days. Did some foundation make them possible? No, these were for-profit schools created by poor but persevering entrepreneurs.

Read the whole thing.
Posted by Brandon Dutcher at 11:41 AM

Email ThisBlogThis!Share to TwitterShare to FacebookShare to Pinterest
Labels: Lighting a Candle, Profit